This is going to be the first part of a tutorial to create a simple game using Super Tilemap Editor (STME). This tutorial will be focused on using the tools provided by STME more than just how to make a simple game using Unity, so think in this game tutorial like an excuse to comment some of the features included in STME and how to use them.

So let’s start with a brief summary about the content for the tutorial part 1:

To make it more fun, we are going to make a game based on Packman and Oh Mummy and to make it more original it will take some ideas from the movie Temple of Doom.

You are an explorer looking for adventures and you hear about a Temple of Doom in the middle of the Amazonas with wonderful treasures and a mystic idol made of gold that you want to include to your collection or weird artifacts. But you has been told the Temple is full of traps and a mummy is protecting the idol from undesirable thieves.

You start the game in the entrance of the temple. Your objective is to find the Golden Idol and leave the temple alive. Optionally you can find also some treasures to finance future expeditions and items that will help you in this adventure.

Golden Idol: once you get the idol, the mummy will came for you and the broken floor tiles will fall, so you better run to the exit.

Bag of Sand: if you have the bag of sand before taking the idol, it will give you some time before the events after stolen the idol start.

Golden Coins: give you 10, 20 and 30 golden coins each you collect, to pay for future expeditions (in a future DLC, for this tutorial consider them as your score).

Hammer: allows you to break broken walls until the hammer is broken.

Map: shows you the path to the Golden Idol and to the exit.

Torch: Illuminates the path and scares away the mummy.

Explorer: The adventurer protagonist of this game controlled by the player.

Mummy: The guardian of the Temple, will kill anyone who dares to steal their precious Golden Idol. He’ll try to possess you. So get away from him.

Thanks to oryxdesignlab for allowing me to use some of their graphics for this tutorial. All the graphics (except the Golden Idol), are part of the Oryx Sprite Packages:

They are intended to be used as examples for this tutorial and not for reuse.

I have used Aseprite to make modifications to the graphics and crate some of them, like the Golden Idol. It’s a really powerful tool for pixel art and very easy to use.

2. Creating a Tileset from an atlas texture

I guess you already created a new project and downloaded the last version of Super Tilemap Editor. Next thing you need to do is download the resources used for this tutorial:

Then import the resources into your project, in my case it was in the folder “Assets\_Game_\Tilesets”.

Right clic over the Atlas Image, then go to Create->SuperTilemapEditor->Tileset to create a tileset and assign the selected texture to the tileset. You can also create a tileset first and later select the atlas texture, but this way is faster.

I have added some space in the texture for more tiles in the future.

TIP: If you later need a bigger texture, you can extend it vertically (increasing the height) and press Slice button to add the new tiles making the previous tilemaps compatible with this new atlas texture. But it won’t be compatible if you change the width because the previous tile ids will change.

As you can see, the Brush Palette is empty. A brush is an asset with special code to change the tile according to some rules. For example, it could select a tile depending on the neighbor tiles or change the tile after a while to animate it, or just select a random tile to reduce repetition.

We are now going to create a Road Brush. This brush will change the tile according to the neighbor tiles on top, right, left and bottom position. We are going to use this brush for the walls.

You can see, creating a Wall brush was easy because the tile layout was the same as the Road brush layout. But what if the layout is different?

In this case, you need to select the tiles one by one for the first brush, but after that, you can create a new brush duplicating a previous brush (ex: selecting the brush and pressing Ctrl+D) then change only one of the tiles, and press Autocomplete. The rest of tiles will be changed taking the modified tile as reference. You can also change the RoadBrushEditor code to fit your custom layout.

Now lets create a Random Brush for the floor. We can use the two different versions of the floor tile for that. 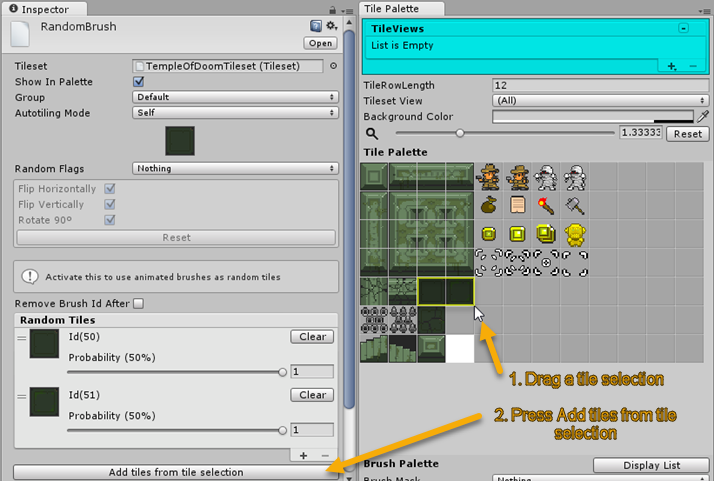 You can also add tiles manually pressing ‘+’ to duplicate the selected tile or create a new one and then change a tile by pressing over the tile preview and then over the new tile in the Tile Palette.

Also, you can change the probability of the tile to appear.

Finally, we can import the new brushes in the tileset by pressing the Import Button:

Now that we have created a tileset and some brushes we can start creating our first level.

4. Creating a tilemap group and a simple level using the tileset and the brushes

After that, we are going to rename the tilemaps to Walls, Actors and Floor and we will change the sorting order so the walls are rendered over the Actors and the Actors over the Floor.

Drawing the level is easy. You just need to select the tilemap you want to paint to (pressing ‘+’ and ‘-‘ keys will cycle through the tilemap group tilemaps). Then select the Paint tab and select a tile to start paining. You can use the paint tools to draw basic forms.

TIP 1: You can also right click a tile to copy that tile or make a selection of tiles as well. If you only copy an empty tile you can erase the tiles (painting an empty tile).

TIP 2: If you forgot to change to the right tilemap while painting, you can use the Highlight Alpha property to change the alpha of unselected tilemaps.

5. Adding colliders to the wall tiles

To add colliders to the walls we need first to setup the collider data for the wall tiles. For this we need to open the Tile Property Window (right click on a tile in the tile palette or going to the menu->SuperTilemapEditor->Window->Tile Properties Window).

Then we need to select the wall tiles and go to the Collider tab and press Full (because the collider will cover the entire tile). To make it faster you can select more than a tile to make the modifications at once.

The tile collider properties only configure the shape of the collider, not the type of collider. A full collider is used for optimization, but its behaviour is the same as a Polygon collider. The only difference is, a polygon collider allow you to change the number of vertices and its position to create different shapes.

TIP: You can configure the tile colliders also directly in the scene view while the Collider Tab is selected. Check the info box in the bottom left corner to see how.

If you have tried to paint the broken wall in the middle of a wall, you will have noticed that the wall is not autotiling with this tile, like if it was a virus or a strange agent to avoid.

This is happening because, by default, the brush autotiles only with itself. The brushes check the neighbors and decide the tile based on the autotiling check with them.

In order to make the Wall Brush to consider another tile a friend tile to autotile with, you have different options:

By default, a brush will autotile only with a brush tile of the same type, here you can change the autotiling mode and combine them. 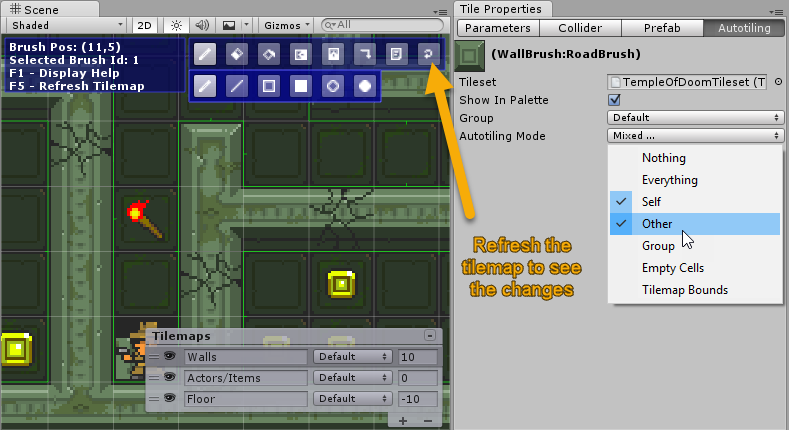 After changing the Autotiling Mode you need to refresh the tilemap to see the changes.

For example, if we want to paint a door tile in the middle of a wall and we don’t want the door to autotile with the wall tiles:

Now we can select the Wall Brush and change the Autotiling Mode to (Self + Group) and then change the Group from Default to Wall. And do the last step with the broken wall tiles as well.

Now, Refresh the Wall tilemap to see the changes. The Wall is not autotiling with the broken wall but not with the Map tile. 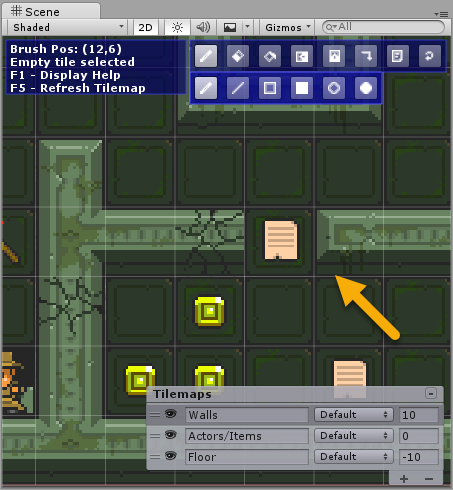 With this ends the first part of this tutorial.

You can Download the example project used as example here:

I hope you have enjoyed it. If you did, please share it with your friends and spread the word. That would help me to create new tutorials.

And if you have any suggestion to improve this tutorial, don’t hesitate to let me know leaving a reply in this post.

In the next tutorial we will focus more in gameplay, creating a player, the mummy AI working with pathfinding and more…

Here is an advance of what we will see in the next tutorial:

This site uses cookies to improve your experience. Find out more.